Are we watching more or less TV during the holidays?

Published on Monday, 15 August 2016 by Belinda Kayton in Technology 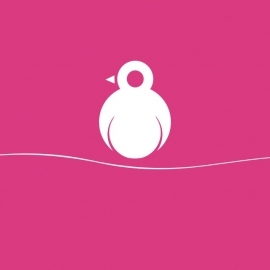 The MediaShop's Belinda Kayton says that it seems we find a way to watch the box no matter where we are or what time of year it is. And don't be fooled by thinking that there's low viewership on a Friday night – it's quite the opposite.

Further to our 'Gender and Genres' look at TV viewing we did a while ago, I wanted to either prove or dispel the belief that during holiday seasons, TV viewing drops significantly.

We knew that there would be some viewership drop off due to holiday makers changing their address and therefore not being measured by peoplemeter, but the data clearly indicates that people are still watching TV. It would take forever and a day to run data across all TV stations, and because there is a ceiling of 8 stations at a time (for the purpose of this "study"), I chose to look at the viewing patterns of the following stations:

I decided not to choose any sports channels because the content is hugely dependent on what is happening at the time (Olympics will mean a spike in viewers, as well as any other popular events such as Wimbledon, Masters, Tour de France etc).

Kiddie's channels were also left off, because their viewing patterns are very stable – they watch Disney, Cartoon Network or Nickelodeon whether they are on the moon or in the desert!

So – the big question – IS THERE HOLIDAY SEASONALITY or not?

If we look at the graphs below (average AR's by month by TA by station), we note that there are definitely ebbs and flows during the year, with a marked increase from June/July which is a holiday period. There is a very slight drop off in November and December – but nothing to really make one sit up and scream SEASONALITY. This can be attributed to holiday makers viewing elsewhere or not viewing at all (if overseas etc).

It is interesting to note the September spike in viewership – the assumption is that the summer season is upon us, and viewership figures will decrease a little because people are out and about. Again, that's not the case.

When we interrogate LSM 8-10 and the DSTV channels chosen, we see a dip in May and December on MNET, and a decrease in AR's from August on Kyknet. The shift in audience on Kyknet for August and September could arguably be attributed to the Rugby World Cup, but is an interesting anomaly for the other months. 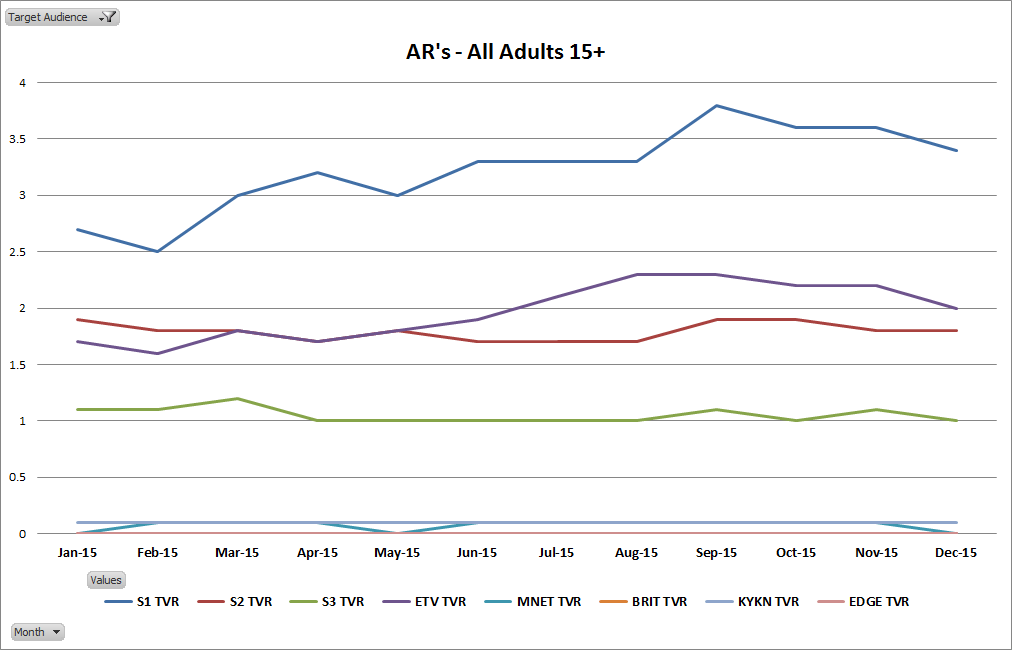 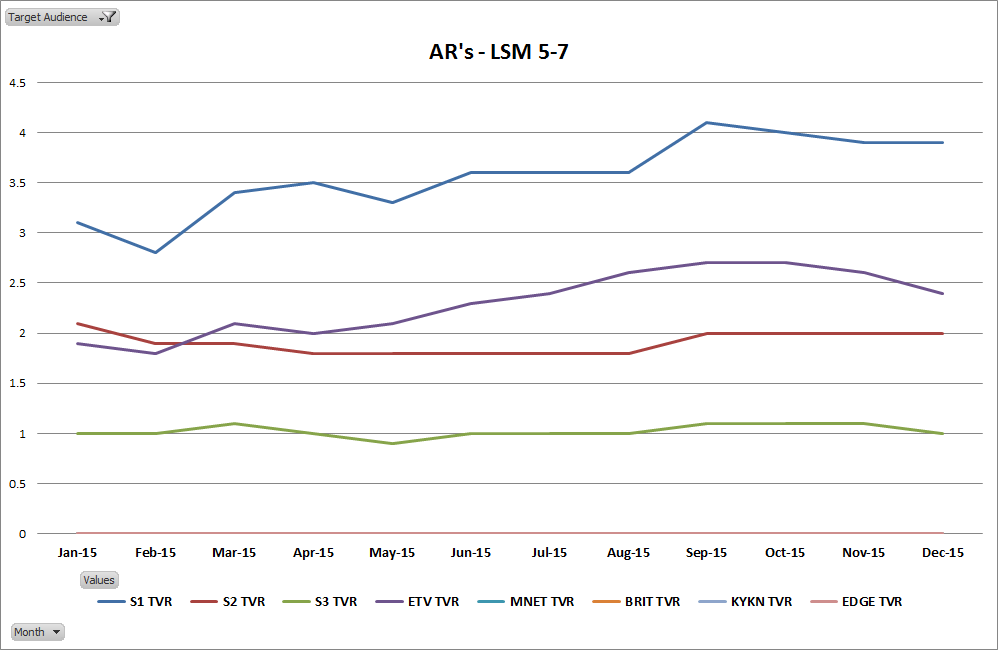 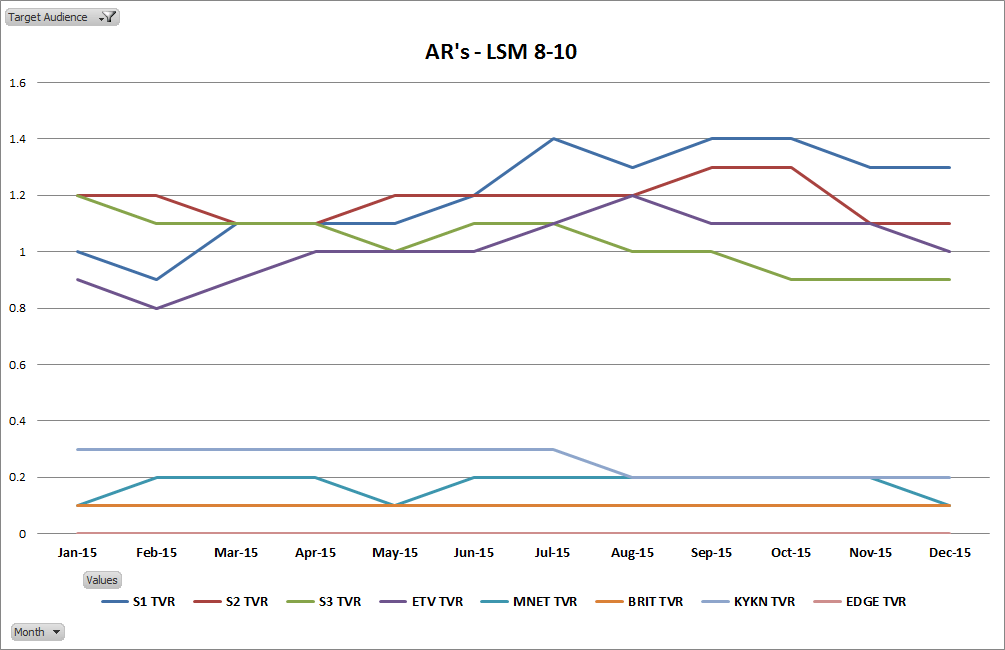 Ever wonder about number of hours viewed by day or if there are any particular days that show more hours viewed, than others? Let's have a look... 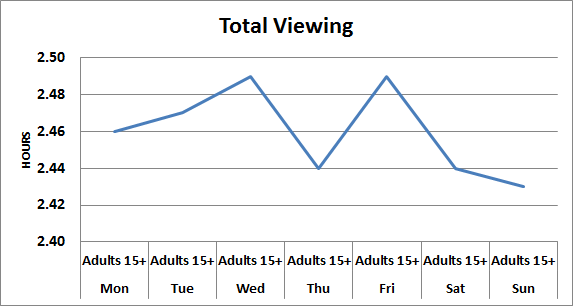 Total viewing hours against All Adults 15+ show a major decline on a Thursday, and contrary to popular belief that Fridays are CLUB NIGHT, there is a spike on a Friday night, tapering off to the end of the weekend. 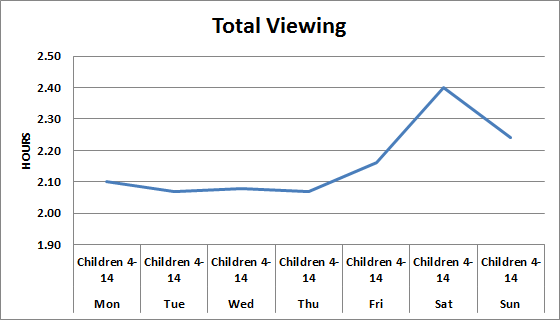 The kids viewing patterns are what we would expect – major weekend viewing. 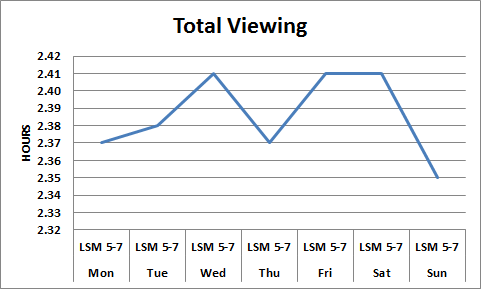 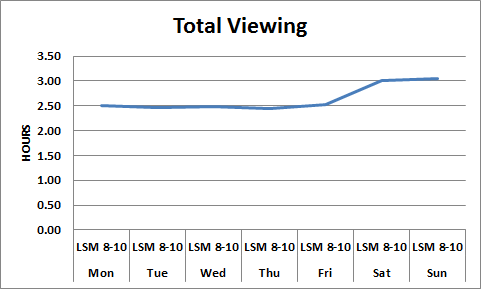 LSM 5-7 vs LSM 8-10 viewing is interesting in the differences: the steady viewing hours of LSM 8-10 during the week which then shows the opposite over the weekends. The number of hours viewed on a Sunday against our LSM 8-10 market increases, whilst the LSM 5-7 pattern decreases.

I hope that this sheds some light on seasonality and daily TV viewership. I'd love to hear from you if there are any other TV myths you'd like investigated! Contact me on This email address is being protected from spambots. You need JavaScript enabled to view it..