Published on Thursday, 03 June 2021 by Colin Ramparsadh in Marketing 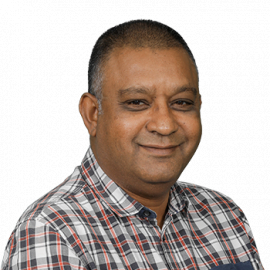 Growing up I used to go to hospital twice a month on a Friday for epilepsy treatment at the young age of six. My Mum never missed my appointments and I was closely monitored by the doctors. Dr Muller used to tell my Mum to get used to the idea that her son would never finish school and may not even have a career. This saddened her greatly and from a young age she taught me to be a better person and to never give up. She was determined to prove Dr Muller wrong.

Fast forward 20 years and there I am on my way to becoming a hot shot media strategist - or so I thought. My Media Director at the time, Chris Rainford gave me the toughest time of my life. She constantly told me that I would never succeed in media and that I should go work in a corner café somewhere (true story). It got to a point where my confidence levels were at an all-time low and I started to believe that maybe I should just quit.

But, the Dr Muller memory kept playing in my head and I believed that if I quit now I would be letting my Mum down and I would be letting myself down. I persevered and from working with Chris went on to continue my career in advertising and media. My determination and the courage from my Mum gave me the will to succeed. Years later, after I had left Chris, she met me at a function and gave me a huge hug and simply said “I’m proud of you and your achievements, well done.” I’m glad we spoke that day as she passed on six months later.

Fast forward another ten years. I’m sitting in my office at Leo Burnet, long before it became Starcom. My phone rang. On the end of the phone was a lady named Kate (As I don’t have her permission for the purposes of this story I will call her Kate). She introduced herself and said that she was from XYZ magazine and wanted me to advertise for my client SAA. I asked her a few questions about her magazine which she couldn’t answer, not even a simple “what is your circulation”. At this stage I was getting irritated and said “ don’t phone me back until you know what you talking about” and put the phone down. I never realised what happened thereafter until five years later. I was at a client dinner with a media owner. After the normal pleasantries with everyone had passed, someone walked up to me with a hand stretched out and said “Hi I’m Kate remember me?”

My memory was working overtime, I was so sure I’d never seen this person before. She then said we never met but proceeded to tell me the story of what happened five years ago. It was her first day on the job working at that company. Her sales manager had asked her to phone me and ask for SAA advertising. She had never sold anything in her life before and had to try. When I put the phone down on her she had started crying. When her manager asked what was wrong she said “ that man was mean to me, he said I don’t know what I’m talking about”.

It was an important lesson she learned as the first task of any great salesperson is to know their product. By this stage I was embarrassed. I destroyed this person’s confidence and memories of Dr Muller and Chris once again began to surface. But instead, she hugged me and said thank you. She said: “If it wasn’t for you being mean to me that day, I would not have made a success of my career.”

Sometimes we need a bit of tough love and people to tell us we won’t succeed. It is that which provides the ultimate motivation. Dr Muller and Chris Rainford only wanted me to succeed. My Mum gave me the strength and courage to believe in myself and make a success of my life.