Published on Thursday, 23 September 2021 by Chris Botha in Digital 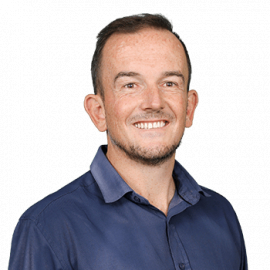 For those of you older than 40, you will remember this picture. The clock strikes 7pm (or 8pm) and the SABC / SAUK announces the evening news on television. Dad sits upright in his chair. Kids must keep quiet for fear of a severe klap to the side of the head. The phone doesn’t ring- because across the country everyone else is doing the same thing. We are watching The News.
This routine was repeated in the papers on a Sunday. Whether it be The Sunday Times or Rapport, parents devoured every article and formed a large part of their world view based on what was served up to them. This is where perceptions were formed - from views about Apartheid, die Swart Gevaar, or even something as far afield as Margaret Thatcher – the news media was an opinion forming machine of immense precision, used by the Apartheid Government with equal meticulousness.

It’s a story much older than Apartheid though. Joseph Goebbels, the chief propagandist for Adolf Hitler famously manipulated a nation into going to war against the world and believing in a complete lunatic.

The power of the news editor was immense. They literally could form the opinion of a nation.

The modern news world I believe has kept what was bad about the 80’s propaganda machine and just built on it. I am not an American political expert but seeing how CNN ‘reported’ on Joe Biden, and Fox News on Donald Trump last year was beyond laughable. That the exact same event could be seen from two completely different angles by the same people – amazed me. These media houses unashamedly continue to hang their flags on a political point of view. They are not independent news outlets – regardless of what anyone might believe.

The 80’s was filled with a couple of very influential people. In South Africa, the news editor of the SABC was arguably one of the most powerful roles in the country. Similarly, the editors of the major daily and weekend press. Today, because of social media – we are all editors. And sadly very, very influential editors.

Recently the Hawks arrested Zamaswazi Majozi for her role in the devastating looting and riots this year. From the comfort of her couch, using only her cellphone she played an important role in inciting public violence.

As another example, I’m sure I am not the only one that has seen posts by “medical experts” on the COVID 19 vaccine. Mostly from an “Anti-vaxxing” perspective. I do believe that globally, these people need to be held accountable in the same way Ms Majozi was.

I think especially amongst the older generation, there is not enough knowledge of the “echo chamber effect”. I have friends who are well educated, but sadly believe whatever they read online. They don’t do their own fact checking, they don’t scrutinise and question what is served up to them, and therefore get consumed by the echo chamber of what is patently fake news. It is so dangerous.

My son is in Grade 8 this year. His current school project is on propaganda, indoctrination and the echo chamber effect. I am so happy that he is learning this at a young age. His generation will be ok.

But I desperately worry and fear for the “Riaan Cruywagen generation”. It’s our responsibility to keep the blinkers off, and work with our families, friends and colleagues to provide ALL sides to the story, and truly drive critical thinking.