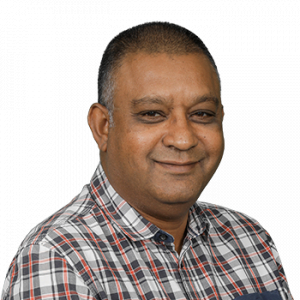 Colin Ramparsadh is a 4th Generation South African. Born and brought up in the dusty town of Lenasia. One of six children and the eldest son.

Colin joined the Advertising industry in 1983 as a Cinema Planner. He has held many positions over the years including Media Planner, Media Strategist, Media Director & Managing Director. He is currently Business Unit Manager at The Media Shop overseeing a staff of 9 people and blue chip clients such as JD Group, Sasol, LG Electronics, Lotto, Bonitas, Peermont, Leza Legal to name a few.

In his past life he has also worked on a cluster of tourism clients namely, SAA, BA, Emirates and Tourism of Thailand. Other accounts that he has managed include DSTV, Renault, Peugeot, Lotto, and Fanta. In 1999 Colin was amongst the team that launched the Lotto into South Africa. Other highlights include being part of a team that won Media Gold at Cannes and a Roger Garlick award.

Colin has Red running through his veins, a true Liverpool supporter whose Favourite song and motto is – YOU NEVER WALK ALONE.

At heart just a softy looking to spend time with his family.